I’ll never forget when I started playing with sunlight. One day in the spring of my seventh year, I entered a room where sunlight was streaming in through a window; half of the carpet was in the sun and the other half was in a shadow. There were some dark metal toys on the floor and some of them were hot to the touch. I was completely fascinated by this. The floor was full of toys, and I noticed that some of them were hotter than others, so I lined them up to see if I could figure “it” out. I wanted to know why the temperatures were different. I learned that some toys got hot faster than other toys and that the toy’s material (soft, plastic, metal, wood, etc.) was important in understanding the relationships between sunlight, temperature, and time.

I noticed that if I kept the material constant, the color of the toy had the biggest impact on its temperature and the rate that it heated up. A dark toy in white sunlight heated up the fastest and became hotter than the lighter colored toys. Not only was the temperature of the toys related to their color, but it was also inversely related to the “distance” between the toy’s color and the color of the light. The further the toy’s color was from white, the warmer it would be when compared to lighter colored toys in the same amount of time.

The pattern was the same as the one I discovered during another experiment rolling marbles from different heights down a ramp. I didn’t know this with words, but I understood it intuitively. A type of energy plus a way to release it is related to the distance between the potentials. 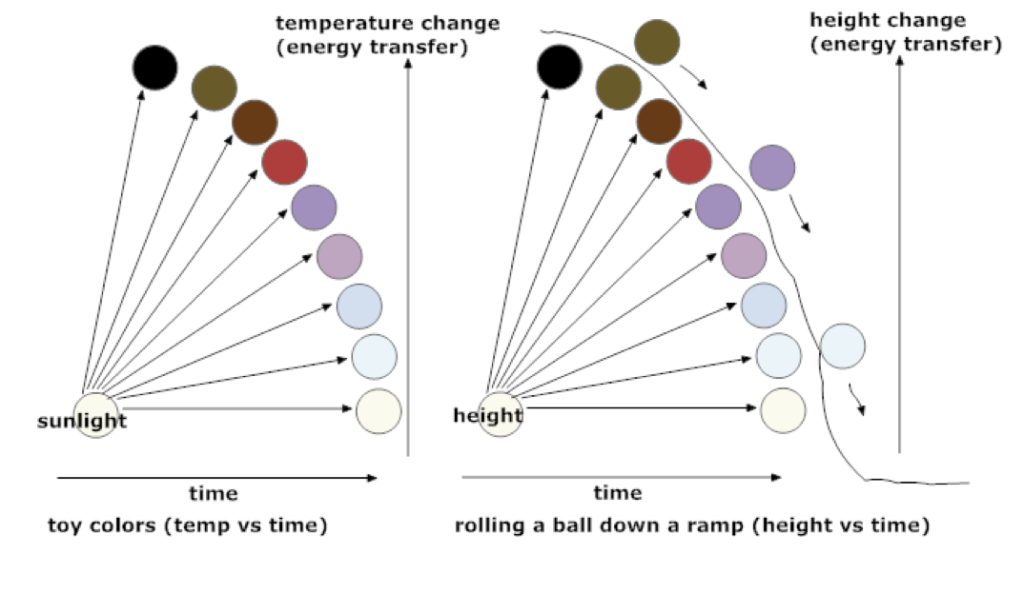 When I imagined the relationships between time, temperature, and color, I visualized the picture above. (The words I added much, much later!)

I love to find matching patterns.