Trying to Measure the Speed of Light

I first heard the words “speed of light” when I was ten. Of course, I immediately wanted to measure it. I grabbed a flashlight and a stopwatch and headed to the bathroom.

The bathroom in our house had a mirrored door, and when the door was open, it was possible to set up a “mirror of a mirror” combination that was around seven iterations deep. My plan was simple. I would turn on the flashlight and start the stopwatch at the same time. When I saw the light hit the wall, after bouncing off the mirror six times, I’d turn off the stopwatch.  This would give me distance and time. From those two numbers, I could figure out the speed (speed = distance/time). 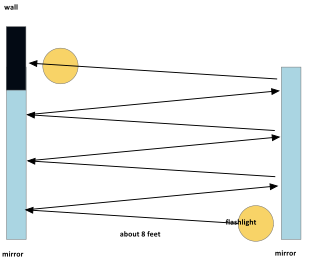 This is when I learned that some things happen too fast to measure. I think this observation made me more open-minded.